By Bianca Fisan / LunaLight7
P 14 nov 2018 12:55
After the announcement of the Razer keyboard and mouse kit for Xbox One, reappointed to the event X018 and which we will know more in January, it seems that now also another gaming peripherals manufacturer wants to board the train of mouse and keyboard for the console Microsoft. This is Corsair , which has just announced the production of mice and keyboards with officially licensed Xbox.

On their official website , in fact, Corsair has brought out some of his products suited to players on consoles, recommending a series of mice and keyboards based on the environment where the game: 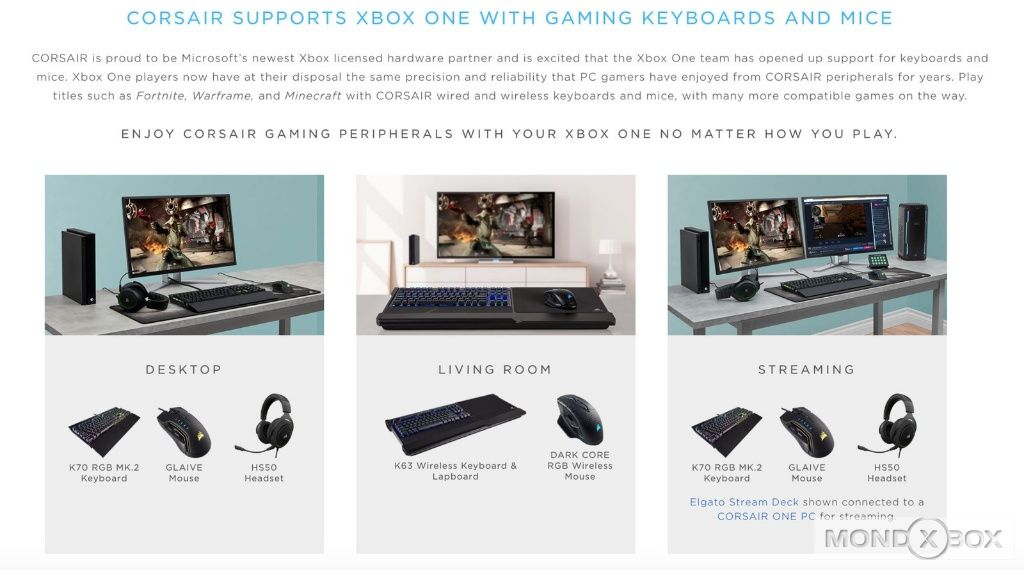 Always during the X018 was annunicata the list of top games compatible with the new features coming soon. Support with games is limited to the implementation by the developers, who must not, however, overlook the balances between peripheral controller users and those who will adopt mouse and keyboard, especially in the case of securities competitive.

Please note however that despite some manufacturers as Razer and Corsair will lead the market for licensed Xbox keyboard and mouse set, the console is compatible with all standard devices of this type, as long as that can be connected via USB or USB wireless dongle.

Codemasters lists the car classes we can drive in DIRT 5

Jez Corden: Lockhart will have a similar shape to an Xbox One S, Series X will not cost more than PS5

Reminder: Games with Gold in the first half of July are now available

Fallout 76 and CrossCode are coming to the Game Pass